Corns, quite simply, are a build up of hard skin caused by friction between toes, or feet and footwear.

They tend to develop mainly around the toes, sometimes in between, or on the plantar surface of the foot. The difference between a corn and a callous is that a corn develops inwardly, in the shape of a cone, causing pressure on nerves, creating the pain associated with corns. 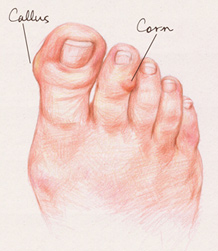 A callous, also often caused by friction, develops more visibly, and can cover a large area, usually on the plantar surface (the bottom) of the foot, and around the heels. It can also form around the toes, but won't have a visible centre as a corn does.

The most efficient way to deal with hard skin is by regular exfoliation, followed by moisturisation. Your foot care practitioner can remove a build up using a drill, or pare it away using a scalpel,  methods taught at the college, to exacting standards.

The scalpel can also be used to remove corns, removing the build up of skin, and relieving the pressure deep down in the nerves. This is usually quite painless, and gives instant results.

If the cause is not, or cannot be dealt with both corns and callouses will continue to appear. Regular six weekly treatments can help to keep problems to a minimum, and your feet comfortable.
A change of footwear can help to minimize recurrence, as can ensuring your footwear are free of rough seams, or any foreign bodies such as grit. Ensure the insoles and linings are wrinkle free too.